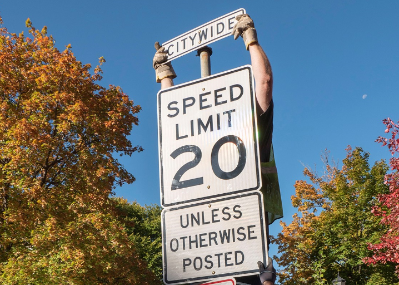 Speed limit changes are taking place in the City of Bayport

Speed limit changes are taking place in Bayport. The speed limit on un-posted streets will be 20 mph. Signage will only be installed at all jurisdiction “gateways,” which are transition areas, such as when turning off of 5th Avenue North or MN Highway 95 onto a municipal street. For streets with a speed limit of 20 mph, any changes take effect as soon as the gateway signage is installed. Signage installation is expected to begin the first week of November and be completed in one day. The public is advised to pay attention to speed limit signage as it will change the limit on all city-owned streets. The City of Bayport is also focused on an educational campaign as a part of the change.

Every city-owned street in Bayport will be limited to 20 mph. Speed limits on county and state-owned roads such as County Road 14/5th Avenue North and MN State Highway 95 are not changing. Speed limit signs on those roadways are posted with the applicable speed limit.

The City Council formally approved this change in October 2021. The topic was first brought before City Council in October 2020 following a 2019 change in State legislation that granted cities the authority to set speed limits on streets under their jurisdiction. After vigorously deliberating the issue at several City Council meetings and conducting a public survey and the speed study, the City Council voted to approve a reduction in speed to 20 mph.